Wargroove is the latest game by Chucklefish, those that made Starbound previously and have published many great games.

The game has been release for PC, XBox One, Nintendo Switch and will be available on Playstation 4. I’m running the PC version and have purchased the game on Steam.

Are you familiar with Advance Wars? This game works in the same way but let’s not be lazy and let’s elaborate on that.

This is a turn based strategy game where you control units and building, you have a base and/or a commander and you must not lose either of them.
There are villages you can capture to increase your income. With your income you will craft units in barracks.

The game features a campaign, an arcade mode, a puzzle mode and multiplayer with crossplay. The game also features a built-in map and campaign editor. 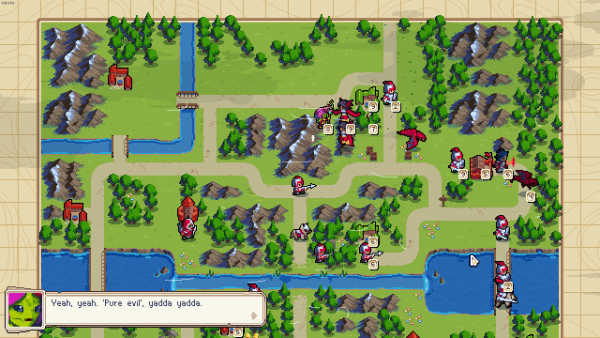 Full mouse, keyboard and controller support is available. There are also accessibility settings for color blindness. So much care has been put in the game.

Each commander has an ultimate move called the “groove”. For example this move heals Mercia and all surrounding units by 50% when used, or Valder can summon a skeleton from the dead.

These moves can make quite the difference but are not necessarily game changers, unlike ultimates in Overwatch for example.

The tutorial does a great job explaining where to get information and how to advance but most of the work will be done by the player and it’s a challenging game. I have yet to get 3 stars in a mission that is not a tutorial during the campaign while playing on the normal difficulty. I am not a smart person maybe.
No need to be smart to have fun.

I would like to personaly thank Chucklefish for bringing this game on multiple platforms and not making it exclusive to any store and also because of crossplay enabling games from everywhere, with every kind of hardware, to connect and play together.

Thank you for making Wargroove the way it is.

I’m not very good but I’m willing to learn from my mistakes. The game looks good and I do enjoy it very much.

If you wish to purchase Wargroove check out the official site or the tweet below:

Wargroove is OUT NOW!